Price includes transportation from Yerevan and the services of a guide.

Does not include: ropeway tickets 5000AMD (~10€ per person), accommodation in Goris and food. 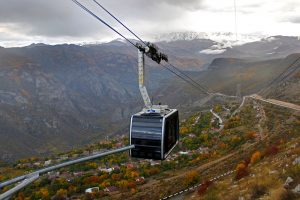 Noravank monastery was founded in 13-14cc. Many consider it to be the most beautiful monastery of Armenia. It is known not only for his main architecture but also for cross-stones and bas-reliefs. The most famous one has the world’s first realistic image of God the Father.

Khor Virap means “deep dungeon”. It was a prison for the most important political prisoners and enemies of the state since the 2c. BC. It is the historical place where at the end of 3c. Gregory the Illuminator, the first patriarch of Armenia was held captive for 13 years. By mysterious circumstances, he was released in 301y. and Christianity was adopted as a state religion, the first time in the world’s history. There you can visit the dungeon. Also, it is the closest place to Ararat mountain, where you will enjoy an awesome view of the mountain.

Khndzoresk is a cave town with more than 3000 caves. It was one of the biggest villages in Armenia with a population of 15.000 people. People lived there from prehistoric ages until the 1990s. Continued invasions during the whole history of Syunik region made them build such safe dwellings. In spite of difficult living conditions, the village had a rich cultural life. There were 3 churches and 3 schools, there are many famous cultural figures from that village. In 2009 a swinging bridge with 163m length and 65m height was built between two slopes of the canyon.